Jane Davis, a recent resident at Parksprings Care Home, Motherwell has made a transformational recovery – and against all the odds has returned home to London.

Jane moved into the care home in December 2017. She had been in hospital for four months and despite working with physiotherapists was barely able to move.

Rosie Brennan, Activity Coordinator at Parksprings said: “Before her illness, Jane had a fit and active lifestyle. Jane felt that her life was over. She struggled to ask for help and didn’t like having people do things for her all the time.”

Nurse, Janice Orr said: “At one point we had to move Jane every two hours to relieve sores and she began to believe that she would never be able to move again. One day at her lowest point she actually told me that she wanted to die and asked me to give her tablets. She had lost so much weight that she didn’t recognise herself. She looked at herself and said: ‘My legs look like spare ribs’.

Jane says the staff never gave up on her even when she did. Janice told her that if she could get out of bed that there was a chance that she might be able to return home. This conversation was the trigger that helped Jane to start focusing on being able to move more. 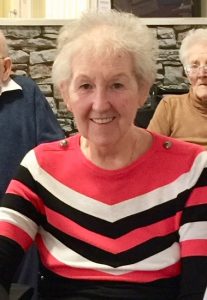 Initially, Jane had to be hoisted, but soon she was able to use the stand aid. Jane endured quite a lot of pain but persevered once she could see the improvements for herself.

Janice said: “One day, Jane asked the carers if they could help her to stand instead of using the stand aid, and when she stood up herself, she said that she could have cried, just being able to
speak to the girls face to face.”

Jane’s aim was to be able to be as independent as possible. But in order to do this, staff identified small, manageable goals by helping her to mobilise to the toilet herself, supporting her to dress
herself and increase leg strength using sit to stand exercises. Jane is now almost completely independent; she makes her own tea and coffee, washes and dresses herself, makes her own bed
and even does her own housework.

When asked what the best bit about being able to move more was, Jane said: “Life. When I
couldn’t move, I felt life wasn’t worth living. Now I can move life is worth living again. I can’t put
into words what the staff have done for me. I wouldn’t have believed that I’d be able to even sit up
but the staff always believed in me”.

Jane has now moved back to London to be closer to family. She’s doing well and is very happy.