Pat has had re-ablement services from Cordia three times over the last few years. Twice, following knee replacements and more recently after she broken hip – the result of a fall in her kitchen.

Every time Pat has reablement she determinedly strives towards achieving her goals so that she can return to her busy social life and weekly hair appointments. 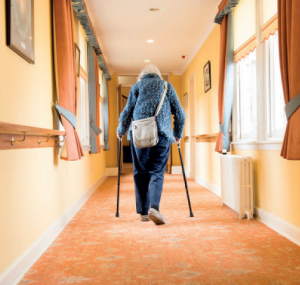 However, this time Pat has struggled to get back on her feet confidently and is still experiencing some pain and uncertainty.

When she was discharged from hospital in March she was assessed by the Glasgow City HSCP Community Rehab Team occupational therapist and set initial goals to help her feel more confident and strong on her feet.

Over her reablement period, she was set a grand total of nine goals, each with some aspect of physical activity built in. Pat’s goals covered a range of things like getting up to answer her front door, standing to look out the window, washing her dishes and emptying her commode. All of these simple daily tasks ensured that Pat was more able to look after her own personal care and get closer to her goal to get out and about again.

Pat was shocked when Yvonne initially told her that she sat in her chair most days for 11 1/2 hours! This motivated her to engage and she felt a real sense of achievement when Yvonne would tell her how much more able she was to stand for longer or open the front door. Pat even insisted that she would keep a note of her progress for her own record. Pat gave her son Paul a row when he tried to get up to answer her door when he was in for one of his frequent visits.

Pat worked hard with her physiotherapist, Laura and recently they supported Pat out of her front door, down the steps onto her path and then down the garden steps to her street. Pat said: ‘I felt tired but I felt a great sense of achievement. It felt great to get outside for the first time in nearly three months! I pray every night that I can just get up and go out walking’

It’s not surprising that Pat is keen to get out and about again. As a former chairperson of the Women’s Guild she has a wide group of friends that she enjoys socialising with. She has a strong faith and would love to be a regular at her local chapel again. But most of all she’s desperate to get her hair done!

Pat often goes on holiday to Blackpool with her friend Cathy. Pat said: ‘Cathy keeps telling me that she’s bored to tears waiting for me to get well so we can go on holiday together.’