By making their garden more accessible and making other environmental changes, staff from Springhill Care Home, Kilmarnock are noticing a big improvement as their residents chat more, move more and appear happier.

Eileen Welch, manager told us Sandy’s story, who sadly died last month. We are publishing his story as a tribute to him with his family’s permission.

She said: “We noticed Sandy, was particularly inactive spending most of his time sitting watching TV. We regularly encouraged Sandy to get involved in a wide range of activities on offer within the home and to go on outings but he often declined, preferring to watch TV.”

Sandy was able to move around independently with his zimmer frame and could rise from the chair on his own, but he had a respiratory condition which limited him at times. When staff discussed what was important to Sandy, he told them that he liked to do things for himself and make his own choices about how he spent his time. Through further discussion they understood he enjoyed gardening. 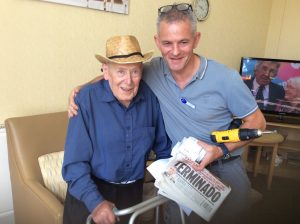 Springhill Care Home underwent some refurbishments and by understanding the importance of enabling environments to promote independence and physical activity there were some dramatic improvements, particularly for Sandy.

Elaine continued: “The garden is now fully accessible, raised beds with water and a watering can nearby allowed Sandy to independently go to the garden and tend to the flowers. Newspapers are at the front door and Sandy was often seen collecting his newspaper and heading to the garden to sit on the bench to read it, instead of back to the TV. There are snack areas situated at each kitchen with accessible snacks and drinks which Sandy helped himself to. A post box at the front door also encouraged Sandy to post his own letters and collect his own mail.

Laura Haggarty, Improvement Adviser said: “Staff noticed a huge improvement in not only Sandy’s activity levels but also his mood improved, and he had more reasons to engage with other people.

“During intergenerational sessions with the local nursery, Sandy didn’t wish to get involved but over time he began to speak to the children often as they walked through the lounge and could be seen watching activities from a distance with great interest. His family were delighted to see such a change in Sandy.”

Sandy still lived his life the way he chose to but he had more reasons and purpose to get up and be active as the environment changes within the home enabled and encouraged this.”

Other environmental changes in Springhill include increased signage, a kitchen cook school where tasks can be performed independently by residents, a whirligig, pegs and a basket for residents to hang washing out, a salon with a waiting area with magazines and refreshments where residents are often now seen gathering and chatting there.

One thought on “Enabling environments promotes more independence and movement”